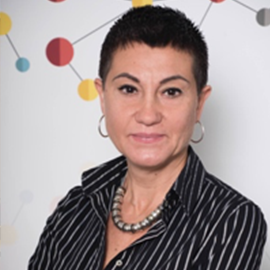 Dr. Nuria E. Campillo received her Ph.D. from Autonoma of Madrid in 1997 under the supervision of Dr. J. Páez. After a postdoctoral appointment at Cambridge University (Prof. T. Blundell), she joined the Instituto de Química Médica (IQM-CSIC) in 2001 (first, as Associate Researcher and since 2003 as Staff Scientist). Since April 2014, Dr. Campillo works in Centro de Investigaciones Biológicas (CIB-CSIC).

Her research interests are focused on the design, synthesis, and pharmacological evaluation of new compounds as potential drugs for neurodegenerative disorders and neglected diseases. She is also interested in the use of machine learning and deep learning for the prediction of biological properties (activity, ADMET…).

She is author of more than 80 scientific publications, 1 book, and several active patents in the field.